Right at 8, the moving team arrived at #435. We went over the items of concern, the new carpet, how to move the L-shaped desk, etc. And then Angela escorted me to guest room #191 where I could spend the day. I didn’t; I almost immediately went out to explore a couple of things, which I’ll go over below. (This is going to be a long post!)

Back to #191 and just relaxing at 1:30 when the phone rang: Angela saying, we’re almost done, I’ll come get you in 20 minutes. And up we went to unit #621. Everything had been put back just where it was five months ago. Gentle Transitions, the moving contractor, takes great pains. They had taken a picture of each drawer and each closet, and carefully put everything back in drawers and shelves just where they were. (Some of the pictures were still in the drawers.)

And the place is just great. The floor plan is almost the same as #435, but the ambience is completely different. And my new carpet, which I had never seen before except as a picture, is perfect. The colors are not garish, but just nicely complementary to my furniture. I took some videos but I don’t like them. I’ll try again.

The new HVAC works well. There is an air diffuser in the ceiling of each room; the air flow is silent and can be adjusted for angle. There’s a thermostat in each room that switches mode automatically from heating to cooling. There are recessed dimmable LED ceiling lights. The new, double-paned windows and patio doors reduce noise from the street and operate smoothly.

Here’s the bedroom/office. You can see the recessed lights and the air diffuser for HVAC.

Bathroom and two large closets to the left. Opposite the bed, a large blank wall where I think I need either some art, or another piece of furniture, or both.

Here’s the living room, now with hard floor and new area rug. I sit in all three locations, depending on time of day. 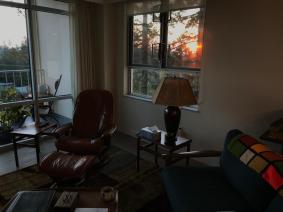 Here’s the living room this morning at 7:20, with the sun rising through the redwood trees outside my window! That second window makes all the difference between a boring apartment one that, frankly, makes me joyful to be in.

There are a few things yet to tweak. I have a lot of prints and pictures that I need to hang, and that needs deciding. (Also, tomorrow, maybe another piece of art.) What to hang on my inside walls, what to hang on my outside, hallway wall. Of course, I am at the very end of a long hall, so what I hang out there will be mostly for my own enjoyment. Hardly anyone else will walk by to be impressed.

In coming weeks I need to install under-cabinet lighting in the kitchenette, and I need to get the closets remodeled. But that will be fun to arrange in March and onward.

In the morning I went out, first to the

I had heard guests at CHM saying they were going next to the Intel Museum so I thought I’d have a look.

Not impressed. They do a very poor job of explaining what an integrated circuit is, or how it is made, or explaining how incredible is the work of designing one. Really inadequate. Very static. They have a couple of interactive video things but they really don’t inform.

From there I went to the 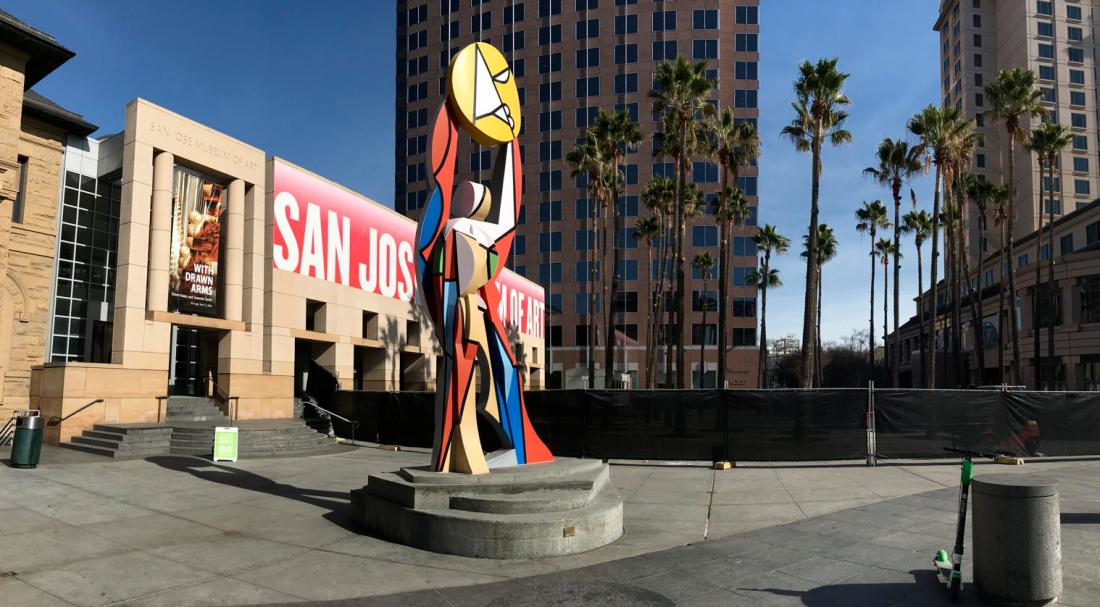 I think we visited this once, maybe in the 90s? Anyway, their emphasis currently is on digital art, and on the Black Power protest by Tommy Smith and John Carlos at the 1968 Olympics.

In the digital art section they had some striking things. But the centerpiece is this, which is quite stunning.

Called Bridge by Glenn Kaino, it consists of 100 reproductions of Tommy Smith’s right arm and clenched fist, suspended as shown. Oh my, did I want to touch that. Just pull the end one back and let it swing… tell me the docents don’t do that, after hours!