I slept in unusually late for me, 8am, which made me a bit late. I had booked an entry to the Cutty Sark for 10am; travel time would be roughly an hour; I needed to shower and shave; where would breakfast fit in? In fact there was really no rush and I knew it. That 10am entry time might matter in the summer, but I expected (and it proved correct) that there would be no line of people and I’d have this major attraction largely to myself whenever I showed up.

Still, out the door at 8:30, toddle up the block to Les Filles, and oh dear, the girls are swamped, place is jammed. Oh well; plan B, go to Greenwich and find breakfast there.

The route was Central Line to Bank, change for the DLR (later I learned it’s Docklands Light Rail), an above-ground line. That ride, even on a dark and rainy morning, was an eye-opener. I’d never gotten to this end of London, the Docklands so called. This is where the greatest part of development has been happening since… the 80s? 90s? Anyway, the train rode a curving viaduct for a couple of miles through an amazing forest of tall buildings. Huge buildings with styles of every recent decade, rectangular apartment blocks, cylindrical glass things, octagons, on and on. And large construction sites where they are building more.

Finally the train crosses to the South bank of the Thames and I got off at Cutty Sark station. A few steps out the station door, and there’s the famous ship just a hundred yards away on the left. (A picture I didn’t take, alas.) But it was not yet 10, and looking to the right I could see that Greenwich has a friendly looking village high street look, with small shops and restaurants. Walking that way I found a nice restaurant for breakfast; a chain outlet, Bill’s; no idea if it is related to the Bill’s that opened a couple years ago on Middlefield in Palo Alto.

Fed and caffeinated, I put up the umbrella and walked back to the Cutty Sark. The preserved tea clipper is in a permanent dry-dock with a remarkable glass roof. 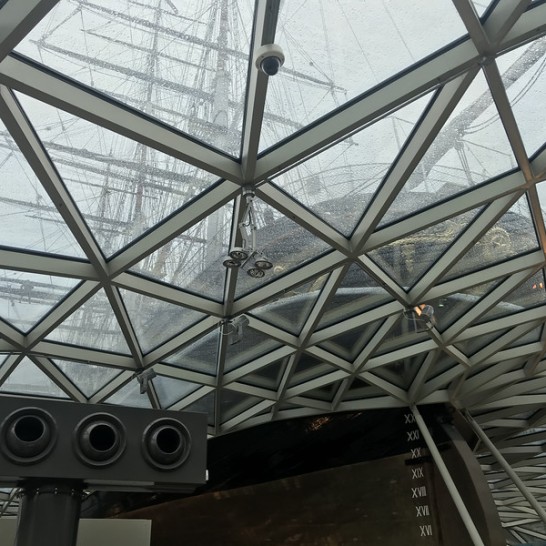 The site does a nice job of teaching you about the construction of the ship and its long use hauling tea from China, and later wool from Australia. You walk through the hold and up to the deck where you can step into the restored foc’s’l and see the sailors’ bunks, and peek into the galley and other rooms, then back to the officers’ quarters. I took a few snaps which I’ll try to organize later. Here’s the helmsman’s view, steering straight into the Docklands.

Next thing was to visit the Royal Observatory. This is a half-mile walk away, through the town center, across a park, and up a rather steep hill. Once at the top and into the site you can stand on The Meridian. From there is a rather nice view of the Docklands. Inside the buildings are very nice and informative displays on the work of the Royal Astronomer, and on the famous Longitude Problem and the intricate clocks that were made attempting to solve it.

So that was that and I headed back down to Greenwich town and the DLR. On the return trip I thought I’d switch up the route. Coming down I’d taken the Central Line to Bank for the DLR. Now I’d take the DLR only to Canary Wharf (a vast office/residential/shopping complex) and change there to the Jubilee Line. That worked, but I was surprised to find that to get from the DLR’s above ground platform to the deep underground Tube, I had to traverse two levels of a huge, and very posh, shopping mall. Anyway, eventually back to my modest hotel. Nothing booked for tonight! What ever shall I do?

…well, as it happened, nothing. I went out for supper at a neighborhood Italian place, very acceptable Tortellini, and then watched TV in my room.

However, I also booked myself for two performance events, Monday and Tuesday night.