6pm, off to see & Juliet at the Shaftsbury theater. Easy route, four stops East on the Central Line to Tottenham Court Road.

For supper I looked around with google maps and picked Zizzo, a trendy pizza place between the Tube and the theater. Easy to find, too, I thought: come out of the station, turn right on Tottenham Court, take the first right, the first left, boom.

Coming out of the station onto the busy street, I got another rush of excitement at being part of an amazing hive. I’ve read other people saying that kind of thing about NYC, the buzz they get from just being there; but I didn’t get the same thrill from Manhattan as I have a couple times here. Part of it might be, that a lot of my Manhattan experience (of two years back) involved being stuck in gridlock traffic in a Lyft or taxi. London (thanks, I gather, to rigid control on vehicles entering the city?) has a lot less gridlock. Even at rush hour, traffic on the main streets flows.

Executed my plan to perfection but — no pizza place. Turns out I didn’t come out of the station onto T.C. Road, so I was 90 degrees out. Anyway, found it eventually. Large place, many tables, packed with the young professional demographic. Ate most of a very good pizza. No beer on the menu; eschewing wine I had a soda. And so around the corner to the theater. Here’s the stage just before the music started. 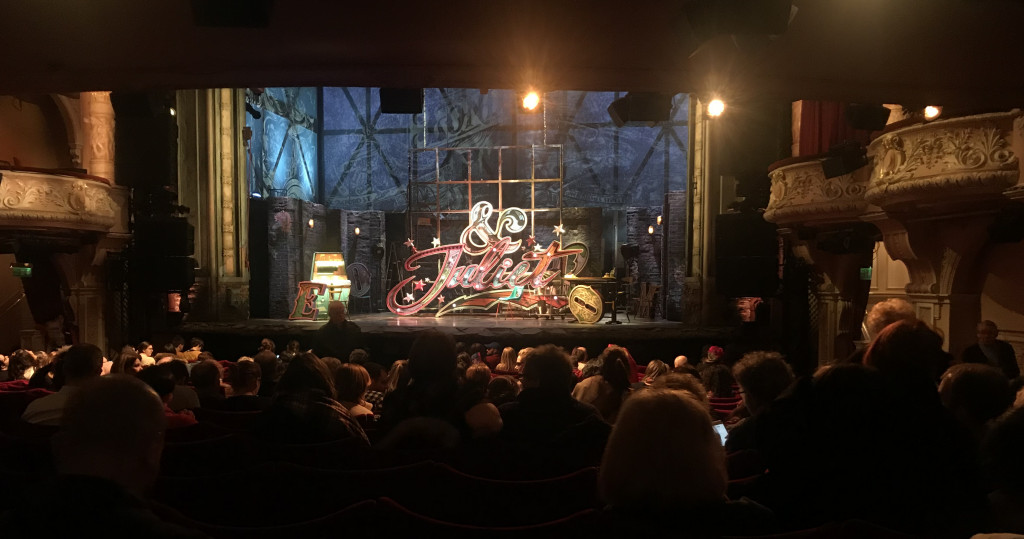 I hadn’t known this in advance, but & Juliet is a “jukebox musical” in the vein of Mama Mia, in this case using the many hit songs of Max Martin (and some others, I recognized “Eye of the Tiger” late in the second act, and that isn’t one of his). Among many other hits, Martin wrote “I kissed a girl” for Katy Perry, and it is used in an unusual way in this play.

The conceit of the show is that Anne Hathaway has a night off from minding the kids down at Stratford, and comes to see husband Will rehearse his new killer ending to Romeo & Juliet: they’ll both die. She objects: why can’t Juliet just… move on? So she and Will alternate extending the play, adding characters, sub-plots, and twists to undercut each other’s changes, as the troupe performs the modified script.

The actors, singers, dancers were all as skilled as you’d expect for the West End (i.e. very). The music was as loud as you’d expect for rock anthems(*). The staging was very complex, with scenery flying in from everywhere. The stage floor had a trap that rose and fell, and a large circular platform that rose and rotated, while a larger ring rotated around it; and there was smoke, and fireworks… more stuff happening than at The Lion King. This is one show they won’t be mounting in local theaters. It was fun, and everybody found their true selves and true loves at the end.

(*) funny thing about the loud music: during the curtain calls, five musicians came out from the wings to take their bows — but they were carrying acoustic instruments, a violin, a guitar, etc. No bleepin’ way, I said. Where’s the electric bass that has been giving me chest CPR for the last 2 hours?