What a nice morning this was! It’s hard to explain; just everything seemed pleasant. Several times I was just walking along and stopped to think, wow, this is nice.

I went around the corner to Cafe Les Filles, which was being run by two women, so name checks out; they had nice pastries and made a very elegant cappuccino, not only with a little heart inscribed in the foam but a band of cinnamon across it. Only problem with this as a coffee shop: no internet. But not a problem; I had adequate cell data service.

Back to my room to plan the day; and I looked at the weather app and realized today was to be sunny but tomorrow, cloudy and rain. Back in November I had booked a ticket for The View From the Shard for Thursday. It would be better today, for sure. Hop on the net and, yes, no problem, I can book for today at 10. (One of the advantages of being a tourist in the dead of winter.) So I did, and then realized I had no way to print my bar-code ticket; but then worked out how to upload it to my Google Drive, and open that on the phone, and voila, a bar-code on the phone.

Out the door at 8:30 and I decided to walk diagonally across Hyde Park and pick up the Tube at Hyde Park station. The morning was crisp (40F) but bright and clear, everything was green, and there were daffodils coming into bud and snowdrops blooming and… just a lovely walk. Here’s a view with me casting a long shadow. 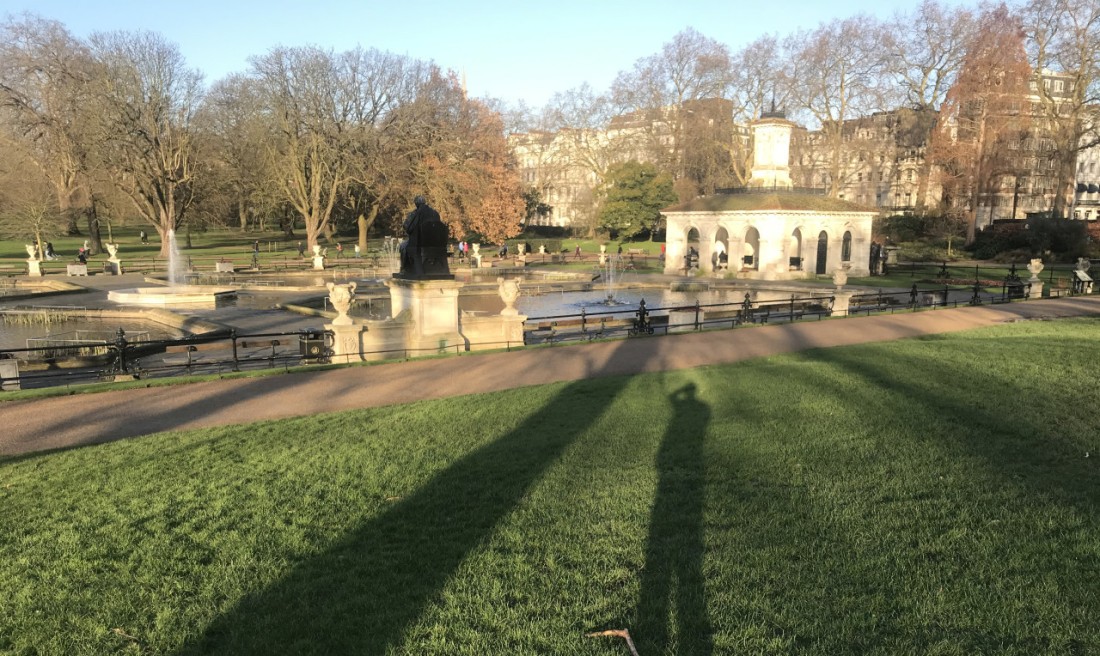 Lots of commuters on the same route. I’m really enjoying people-watching. So many interesting, slightly eccentric people. (And, ok, pretty women.) I picked up the Underground, one stop on the Picadilly line to Green Park, change to the Jubilee line to London Bridge. You can’t see The Shard from close up. Here’s a view of it from the Tate. 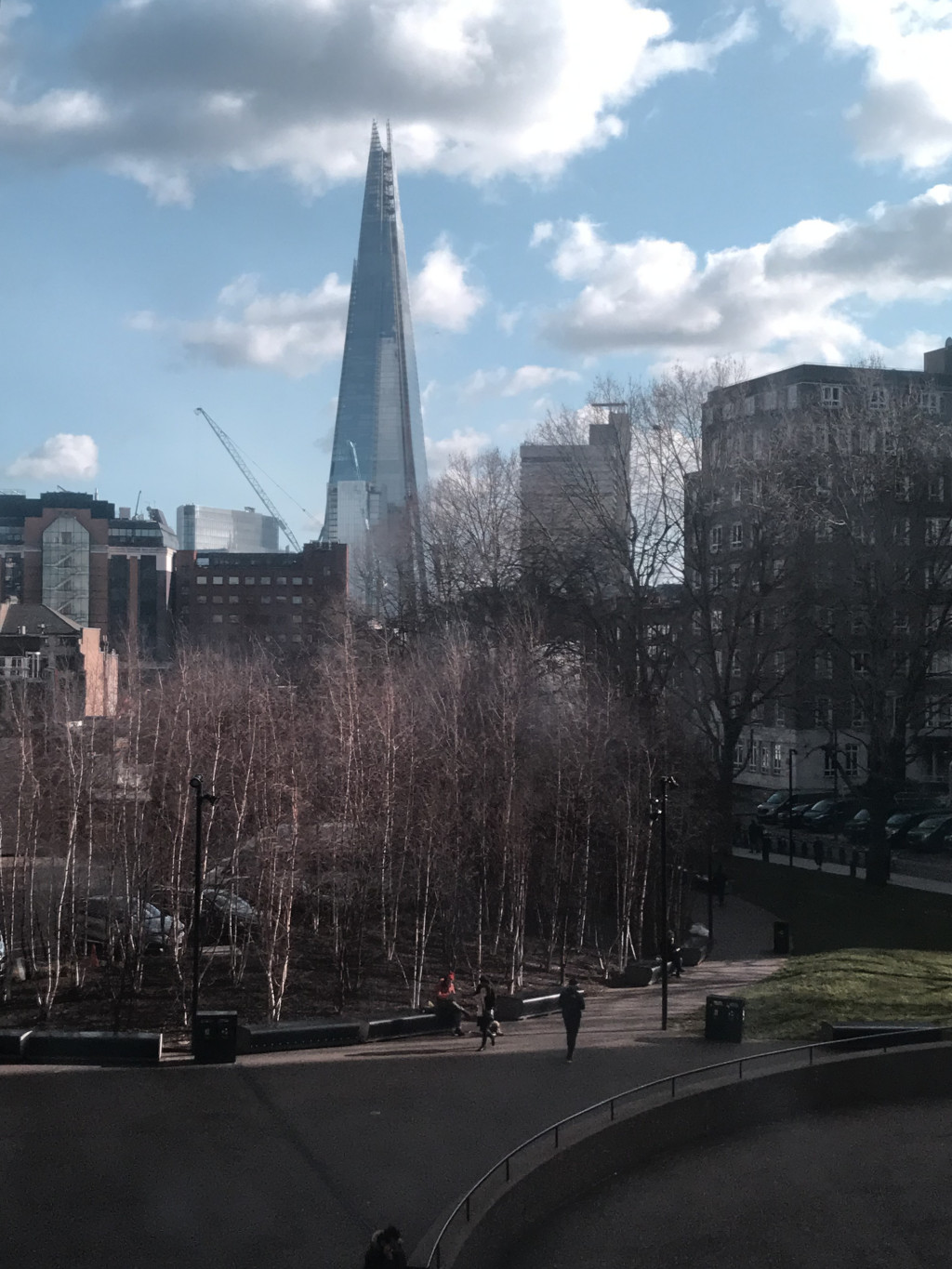 The doors to The View experience opened promptly at 10, and I was one of only three people total waiting. There were friendly staff persons directing the traffic at each stage of the multiple lifts up; it must be a zoo in summer. Today “the traffic” consisted of: me. (The other two people stopped to buy tickets, while I already had mine.) The Shard is the tallest building in the UK, sixth tallest in Europe, per Wikipedia. Here’s a view from the 69th floor viewing area.

I looked around for what seemed quite a while but when I exited one of the friendly staff persons said, “that was quick.” And it had only been 15 minutes. Well, it was bloody cold up there, too.

Next was to walk half a mile to the Tate Modern. This took me past the Borough Market, an old market with nice ironwork. 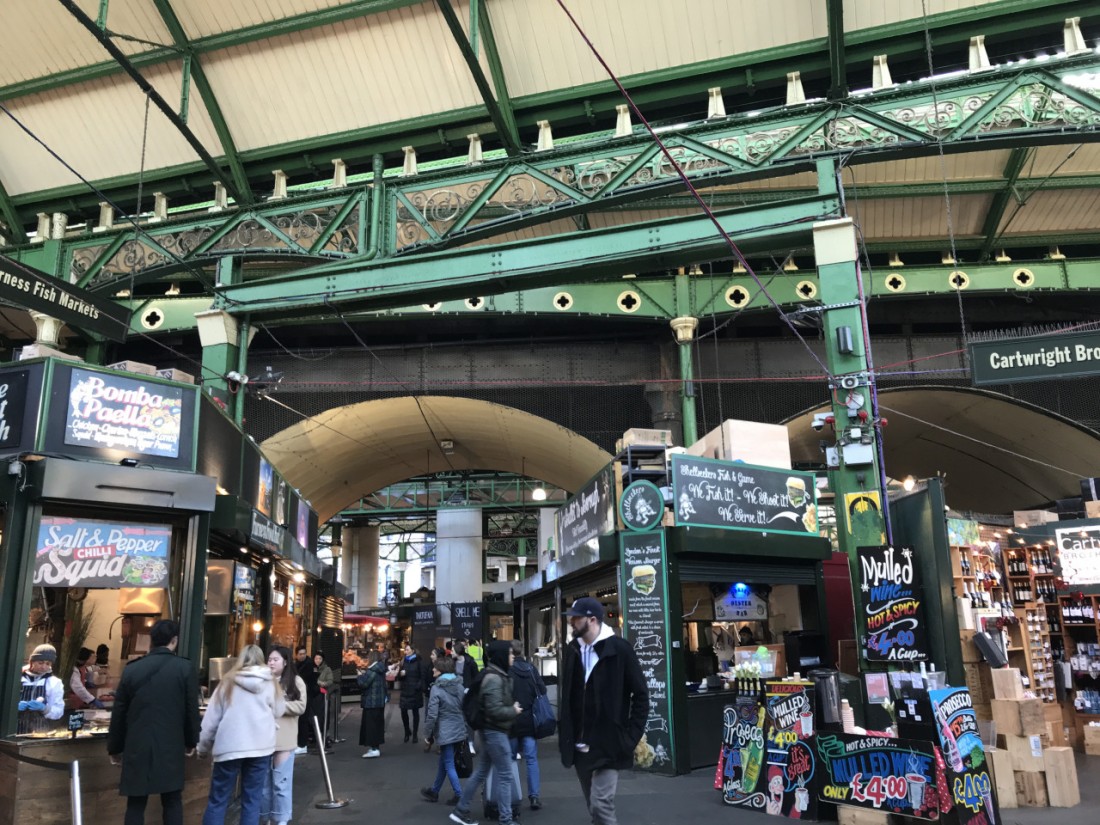 A little further along I reached the riverbank and, looking East, saw wonderful bounce-light illuminating the under-structure of Southwark Bridge.

That took me back! In the 70s, Marian and I made a project of photographing every bridge on the Thames. I can remember other times of standing on the river bank, waiting for good light to come and make a bridge stand out like this one did today. OK, now I had to go and check. Here’s our shot of Southwark from 1976. Note that all the buildings have changed. (I’m pretty sure this is from the South bank, as above. But if it is from the North bank, then even so, no building like that 10-story ugly exists any more.) 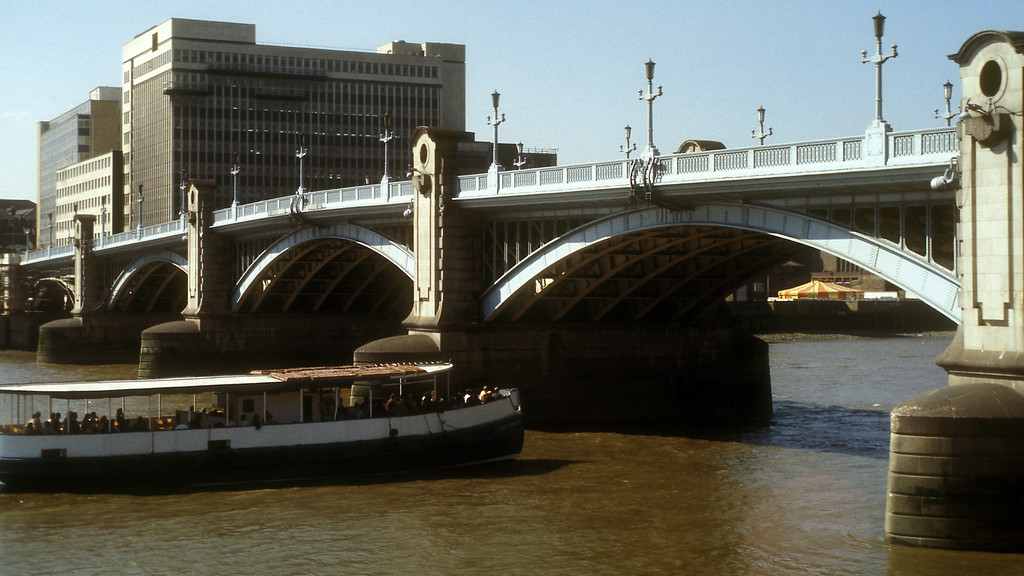 A little further I passed under the South end of the Millennium foot-bridge. We walked that bridge on our return visit in 2005.

And into the Tate Modern. I’m not going to try to comment on art. Well, one general impression. 24 hours before, at the National Gallery, I had been noticing the rich, glowing, saturated colors the 15th Century painters had used (and being amazed at how well they had lasted). Here the contrast to the early moderns, up to the 1970s, was very noticeable. All their colors were dark, muted tones or bleached whites and beiges. And that ends my art commentary.

From the Tate I walked half a mile to the Southwark station. Four stops north, two stops west, and two blocks to the hotel. Total for the morning: 5.8 miles, 13K steps. Well, I’m impressed.

Now to do a bit of laundry and prepare to go out for a play.