Had a lovely sleep, waking only once around 5am and sleeping unusually late, 7:15. Began the day, as has recently become my wont, by walking to the coffee shop. Going and coming, as also usual, I was

the difference between the new life and the old one. We all live within constraints that bend our actions. Some constraints are imposed by the physical world and our bodies, some by society, but many constraints are voluntarily assumed. Marriage brings a thousand little constraints, so many things you wouldn’t do, or do differently, because your partner won’t or can’t do it thus; and all voluntary.

When the marriage is gone, those particular constraints are lifted, but it takes time to understand (in the gut, not just in the mind) that this is not a bad thing, not a loss, but only a change. So why are my eyes damp?

Walking into the yard I notice a little failed plant. Well, not a failure; it is still alive and in fact blooming. I don’t remember its name; it has the unusual feature of blooming direct from dormancy, little purple starbursts on straw-colored stems, without a leaf in sight. But the three of these have never thrived and even when in full leaf, look as if they are about to shrivel and blow away. So? Well, Marian selected these plants for those spots when the garden was remade in 2012, and she always watched them and worried about them. Now I am trying to resolve my feelings about the plants. How Marian felt about those plants is history. Does it have any relevance going forward? How should I feel about them, or, does it matter that I don’t particularly like them and don’t care if they live or die? I don’t have any resolution for these questions.

With time to kill I decided to

In 2012 the reworked yard was mulched; no more lawn. And yards of mulch have been put on it since. Just the same, every winter the rains bring many little green shoots popping up. Pulling them is easy, and I used to regularly go out and spend an hour pulling them while listening to a podcast. This year until now I’d studiously ignored them on the basis of ISMISEP. Or as it should be by now, IFMISEP or even IThMISEP. However I realized that the sprinkle of little green things alongside the walk to the front door could make the place look neglected to potential buyers. So I spent an hour pulling up a couple hundred little green sprouts. During this a

stopped by to chat. Steve, the doctor next door, and I hadn’t spoken in many months. He remarked how he used to see us sitting in the living room and wondered if Marian had had to move to some facility? He hadn’t heard she’d died. I thought all our neighbors knew, but I guess not. So we chatted a while about this and that; I think he was reassuring himself that his geezer neighbor was getting on OK.

came to continue her evaluation of Marian’s jewelry. She is being incredibly generous with her time, putting many hours into this and promising to deliver a complete report on Friday, and not asking for payment. Louise has also remodeled her current house in Seattle, so we naturally ended up talking about the things Chuck thinks might be done to spiff up this house.

Like me, she doesn’t see any problem with having a door between the stove and refrigerator. But she had a great idea for the bedroom, where Chuck’s design consultant Amy wanted to put a tub and toilet. Louise agreed that people, as she put it, pay ridiculous sums in order they can go from the bed to the toilet in five steps. But she thought it would be better to make the current walk-in closet into a bathroom, with a European style shower, and then she remembered the right phrase, “a wet room”. A wet room (according to that link) is

Such a room would fit nicely in the closet space, while the passage between the bedroom proper and the closet/wet-room — space I’ve used as my office for decades — could be furnished as an elegant his-n-hers closet area.

While Louise was working I started cleaning up my

of which I have 4. I have fully moved my daily life to Godot, so there are two MacBook Airs, Marian’s old one that was getting flaky and the newer one we got for her a year ago, and my rather tired MacBook Pro that Godot replaced. So while Louise rated gems and tested gold, I created a bootable USB drive with Mac OS X “Mojave” on it, and did a disk erase and clean install of the OS on the newer Air and the Pro. There was a little qualm in finally erasing Marian’s machine, but I am confident I moved all significant files to the cloud weeks ago. I’ve needed to refer to nothing on it since December.

get the hell out

of the house. I drove up Page Mill road to Skyline where there is a trailhead, and went for a mile and a half walk on Russian Ridge. I took a panorama from a hill but in fact, the best view came a little later, as I was driving North on Skyline. Behold the absolute essence of California coast springtime: 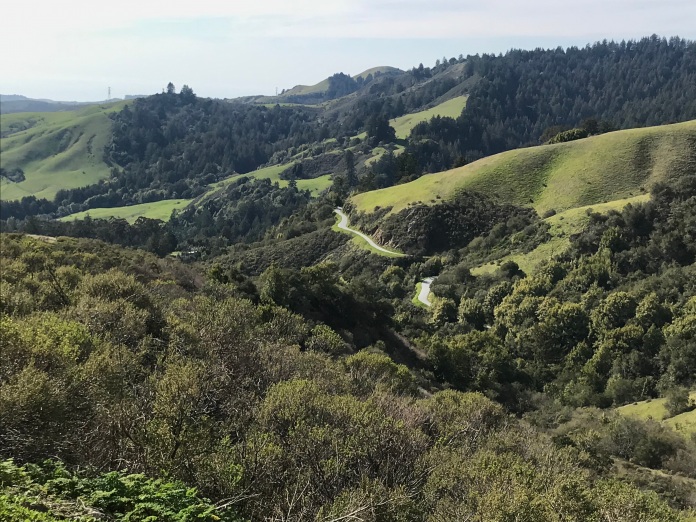 I don’t even know what that road is, or how to get to it. I was surprised to see a paved road when looking West from Skyline drive. (Edit: probably Rapley Ranch Road.)

Anyway I came down 84 through Woodside, enjoying how the Prius plug-in charged 6 or 7 miles-worth of power in its battery on the descent. Now home, I am thinking about going out again for supper somewhere.