We have a slow departure day today: “bags out” at 10am, meet to get on the bus at 11am. I enjoy the posh breakfast bar one more time — how do you know it’s a five-star hotel? One item in the breakfast bar is a large bowl of macadamia nuts. Another is a large honeycomb (not honey, an actual comb) to scrape onto your yogurt — and then had to kill some time. I went for a short walk, up a hill hoping for a view, but didn’t get one. Then I just went to the lobby meeting point and sat.

Anastasia announced a change of plan. The itinerary called for a 12pm ferry to Paros, and lunch there. However, that had assumed the summer ferry schedule and they’d just switched to the winter one, with a 1:30 departure. So now we would walk around the harbor and have lunch at a Mykonos restaurant. The sun was very bright and I’d now walked the perimeter of the little harbor four times before. But the lunch was quite good.

The ferry was a “Sea Jet”, a big catamaran hull. It backs up to the dock and lowers a ramp. A large mob of people get off, all pulling roller bags, and disperse to waiting buses and cars. Then the Paros-bound mob, of which we are a tiny part, pull our bags up the ramp and find places to stack them in metal racks just inside the car deck. Then upstairs to a very comfortable large cabin with big seats, and by that time the ship is well away.

Forty minutes later the announcement comes (announcements are always in Greek then English by the way) that we are docking in Paros. The mob descends to the car deck, everyone finds their bags, and we wait for the rear ramp to lower. I have a good picture of this but it is taking forever to upload from the phone on this hotel’s wifi. OK here we are. Note that Paros appears to be much like Mykonos, except the hills are higher. 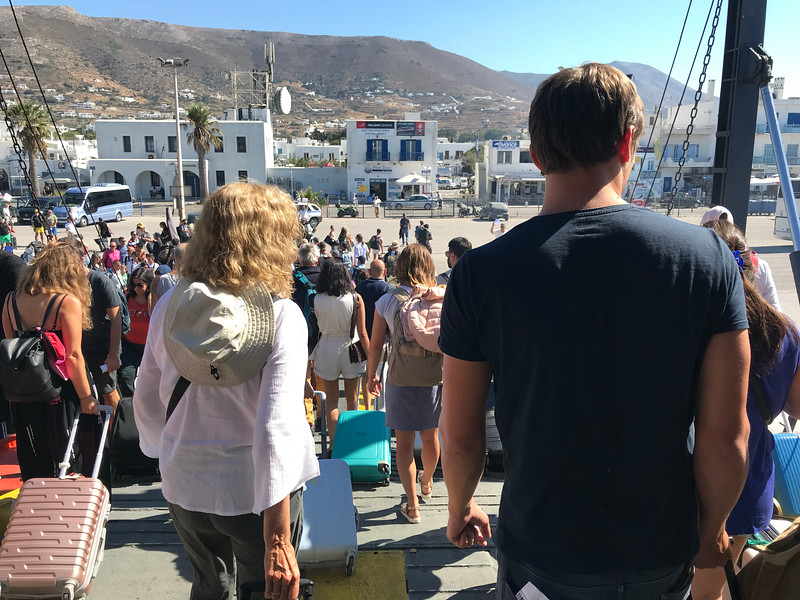 So we bus to the Hotel Aegeon, which is clean and charming but quite a step down from five stars. Maybe 3.5. Anastasia announces we will meet for a walk to town and supper at 5:50, so, time for a nap. I think I will publish this and put in the evening’s activities in tomorrow’s post.