Started by driving to the Y for a little exercise. On the way back I stopped at Tasso street, where I found the cleaning crew at work. My only reason was to check on the oval mirrors. Back when we remodeled the bathroom in 1974, the wash basin was built into a custom triangular vanity in the corner. Rather that putting up conventional sheet mirrors making a right-angled box of mirrored wall, we (with some trouble) managed to find large oval mirrors for the two walls above the basin. 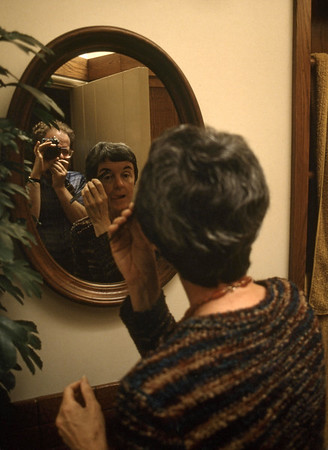 Here’s a picture from 1989, showing the mirror on the right. There’s a matching one on the left. So during the current work the painters had taken the mirrors down, and I wanted to reassure myself they were still around. They are, stored in the walk-in closet in the back. However the painters removed the hooks they were hung on, and patched the wall. So new hooks have to be put up to re-hang them.

I let Chuck know about this, in case the buyers asked, how are we supposed to comb our hair, then?

The rest of the day was pretty quiet. I spent about three hours collecting links to a variety of online Lisp based ebooks. I sat down with my Lisp IDE and worked through the first chapter of one tutorial, and then of another, trying to judge which was the better. Neither is good, but the worse one, unfortunately, is by a fellow author on the Leanpub platform. Ya know, I’ve written a few user manuals, including tutorials, plus done a little bit of programming, so I can tell when I’m in the hands of somebody who understands the material and knows how to present it. I haven’t found a really good Lisp intro book yet, but so far the Lisp Primer by Colin Allen and Maneesh Dhagat is the least bad one I’ve found.

I also ordered replacement checks from Schwab; their reorder function was back and worked smoothly. And paid a bill and watched some TV. For supper I looked at the offerings in the dining room and decided they were boring, so had a meal replacement shake in my room, capping off a quite hermit-like day.