First thing this morning I found in my email, a message from Angela saying that I could move in to CH in May as scheduled, if I was willing to put off the kitchenette and bathroom remodels until after I had moved out again in August. That’s a tough choice! I really don’t like the old stuff; it looks…old. It would be galling to have to live with it for several months. Big issue would be: if I hang around in the old house until mid-June, does that impact the process of selling?

While I was thinking and killing time for my 9:15 departure to the East Bay, Chuck stopped by pick up those pesky forms. He sat to chat for a few minutes, and reassured me that it should make no difference to selling the house, if I move to CH in May or in June. That was the only real consideration, so I decided that I’d take the later date. Among other things, that means that the delivery of my last couple of pieces of furniture, scheduled for the first week of June, can come here, and I’ll have all that I ordered for moving in.

So, off to Yosemite for a day of cataloging. Fun: we cataloged a robot, a big one, over 6 feet tall, called “Baxter”. The cute eyes aren’t there, it’s just an LCD screen. 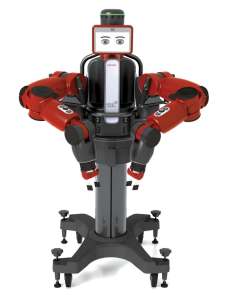 I rode to lunch with Toni and asked her opinion about a problem I’m having with the museum. The manager of docents is Katherina, and Katherina doesn’t seem to communicate well. I have signed up to lead a tour for a group of computer science students from UCSC on 5/11, and I really want to make sure they get a 1401 demo. I emailed Katherina about this last week, and left her a voice mail on Monday. No reply to either. What did Toni think? She thought, call the front desk, find out which person was in charge of booking that tour, and talk to them. So I did that; turned out the person responsible is Poppy. So I called Poppy: not in. I left a voice mail explaining my concern. She didn’t call back this afternoon. Maybe she will tomorrow. If she doesn’t, I’m going to cancel out of that tour. Let them find another docent for it.

On the way home I stopped at Westwinds nursery to see if they have any solution to The Wax Plant Problem. I want to keep the two wax plants; they hang from hooks in windows; there is no hanging place at CH. I have this hook-stand in my Amazon shopping cart but would like to buy locally. Westwinds didn’t have anything like it. I think I’ll check Wegman’s tomorrow

At home I sat down with the intention of chilling out for an hour. But first I sent an email to Angela confirming that I wanted the work done now with the later move-in. I also questioned the cost of one item in the quotes she’d sent me. Late in the afternoon she acknowledged that she’d miscalculated, and sent updated quotes for a couple of items. Hah, glad I checked. But she says I need to sign the quotes for work to start. Tomorrow first thing I need to call her and find out when to meet. I also replied to an email from my insurance agent, and to Darlene about a date to see an exhibit in Oakland. And my hour of chilling-out was gone.