Woke up to some anxiety this morning. Odd, because I had a very good night’s sleep, up once about 2am then slept to 6:30, eight hours total. Six-thirty is unusually late; all through the winter I woke up when the furnace fired up. The thermostat is set to start heating at 6:15. Yesterday and today, the furnace never started. Why? Because for the first time in months, the internal house temperature at 6:15 was 69º, the set-point for 6:15am. This is the true mark of the changing seasons, that no heating is needed in the morning. Another month and it’ll be time to switch over to cooling.

Oh, wait… another month and I won’t be here, probably.

So I arose to anxiety,

a vague feeling of wrongness that I think is associated with yesterday’s final acceptance at C.H. That’s a big commitment to a whole new mode of living. Am I doing the right thing?

To “not be a home-owner” was, as I’ve written before, probably the first decision I made when I began thinking about becoming a widower, a year ago, when Marian was first diagnosed with pancreatic cancer. My thoughts then were theoretical, speculative, but this stood out as a firm conclusion: if she goes, and I’m a widower, I won’t stay in this house. Researching ILFs and choosing Channing House is all the natural consequence of that decision.

I didn’t analyze it at the time; it just seemed right. I’ve explained it to other people since as not wanting the responsibility of a house, tired of worrying about maintenance and insurance and property taxes. That’s all true, but not complete. Analyzing it now, as the coffee water heated this morning, what came to mind was that I really wanted to break with the past. I don’t want to occupy a truncated partnership was the sentence that bubbled up out of my subconscious. (Whoa! Go my subconscious!) To unpack that sentence, I don’t want to continue to live as half a couple, alone in the shell once occupied by the tight little corporation of Dave’n’Marian. The house is the physical representation of that shell.

There are other life styles I could have picked. I could live in a regular apartment. I could become a world traveler, flitting from hotel to hotel with the seasons. I could buy a nice RV and become a “snowbird”, traveling to Alaska in the spring and Arizona in the winter. But C.H. has many practical advantages: it is comfortable; it offers a new community in which I’m pretty sure I can come to be an influential and helpful member; and the continuing medical care means I will not have to be a burden on any of my relatives as I age. The one time I talked with Marian about my “being a bachelor” notions, her only concern was to urge me to keep in mind that I wouldn’t have someone to take care of me the way I was taking care of her. C.H. answers to that issue.

Mulling all that I went for a run, which felt excellent. After a shower and shave, I did some

I tackled two more shelves of the big steel cabinets in the shop. Here’s what I saw first. 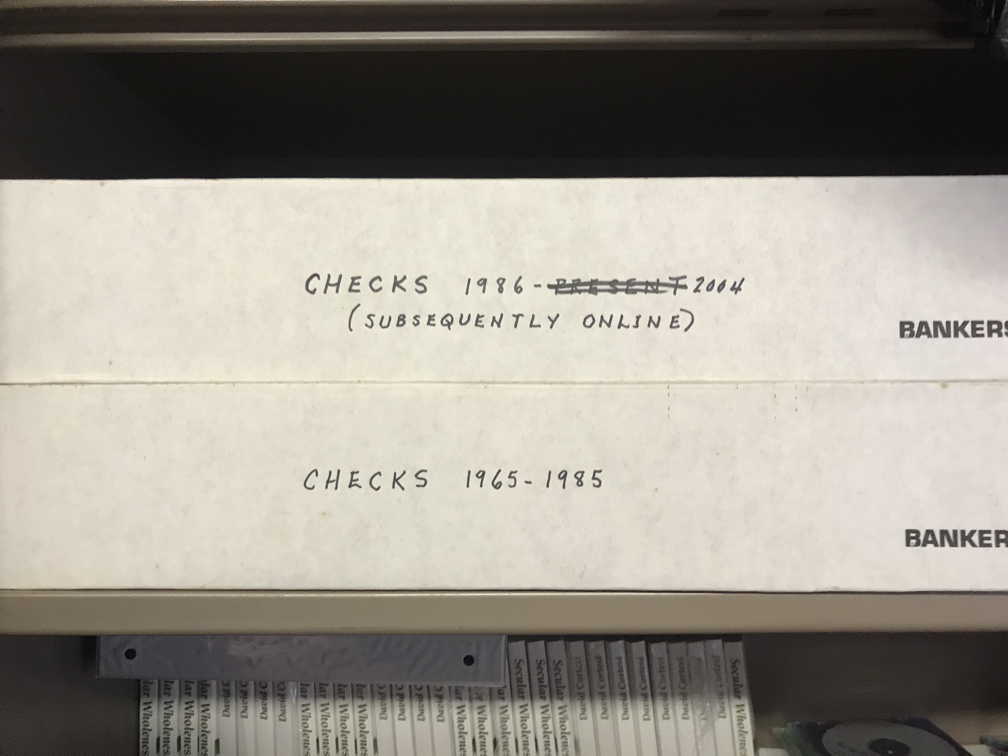 That’s right, two nice banker’s boxes labeled in Marian’s neat hand as you see. Seriously, we have been saving cancelled checks from 1965??? Oh yeah; and old IBM pay stubs, too: 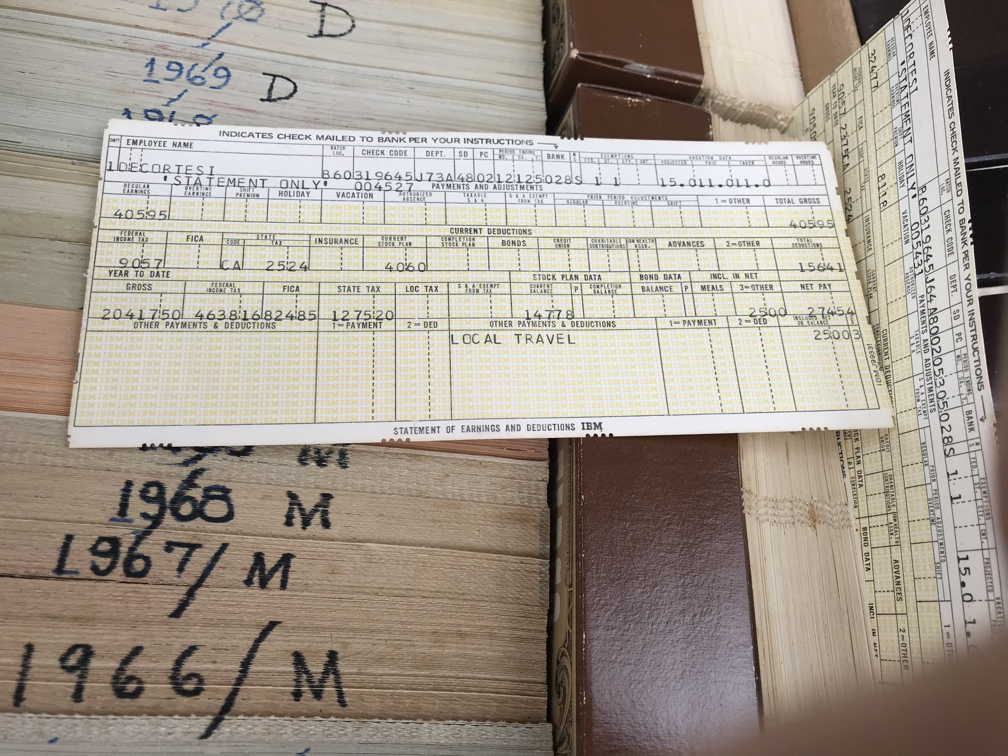 Ignoring the wails of imaginary historians appalled at losing all that good data on the spending habits of mid-century Yuppies, the whole thing went into the recycle bin. 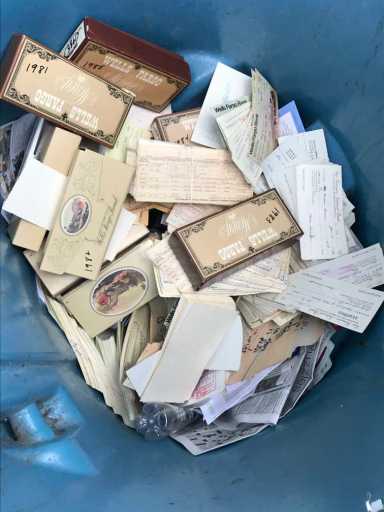 That exposed two shelves of my published books, multiple copies of each.

I won’t throw all of them out, but I fetched a box and put one copy of each book in it. The rest will go into the blue bin tomorrow.

About 1pm I went off to do three hours of sorting at FOPAL. One perk of that job is getting first look at all the donations. I pocketed a copy of On the Road, which I’ve been meaning to re-read, and one of Vonnegut’s Mother Night. I’ll read them (or anyway sample them, I’m not sure I’ll want to read all of Kerouac) and put them back in the stream another day.

At home I found an email containing the standard

a 51pp PDF. Sent copies to the financial guys and also to Chuck, who was curious about it. Need to read it carefully myself! Here’s the meat of it, from article I:

In consideration of the Entrance Fee, Monthly Fee and other fees payable by you under this Agreement, Channing House will provide you with residence, care and services at the Community for the rest of your life, subject to the terms and conditions of this Agreement.

Also got a notification that my

were back, and: no Afib detected. I have rare PVC’s (pre-ventricular contractions, which I’ve had since the 1980s) as well as rare “premature atrial complexes”. But these little blips of irregularity I notice are not of concern. That’s a relief.