Began the day with the customary run. (Marian often complimented me on doing something for exercise every — well, almost every — weekday morning. I accepted the compliments but felt awkward, as if I didn’t deserve credit for doing something so simple. I really  do it out of fear; I’m scared by prospect of how fast my body will turn into a blob if I don’t keep it moving. Twenty years ago, when I was still cycling, I was “off the bike” for six weeks because of a persistent pneumonia. I’ve never forgotten the shock, when I could get back on the bike, of how feeble I had become in a few weeks, and how long it took to get any sort of condition back.)

Then I took care of a loose end. I’ve been keeping Marian’s laptop going just so I could check it each day to see what mail she’d gotten. Boy, was she subscribed to a lot of lists! But after a couple of weeks of clicking “unsubscribe” — and changing the contact email on a number of financial accounts — I’d gotten it down to almost no incoming mail at all. But in the middle of the night a couple of nights ago, it had dawned on me, doh! why do I not simply redirect email to her gmail account, into mine? There must be some way to do that. Today, with only 15 minutes of fiddling around reading Gmail help articles, I found out I could sign in as her, then designate me as a “delegate” who could read her emails and reply or delete them. So I set that up.

Now I can let her laptop sit on a shelf until such time as I can get up the nerve to reformat the drive and sell it. Opening it to see her familiar messy desktop littered with files she’d created… I can’t. Not yet.

I spent a couple of hours on a programming project, or rather, an hour rummaging through system documentation trying to figure out how to do something, and then encountering a bug that kept me from running a test case, then an hour googling for solutions for this bug. Programming. I do it for fun, I tell myself.

As 2pm was approaching and I’m due to help sort books at FOPAL today I pulled down another shelf of books to box up and donate. Here I hit a couple of “shards”, bits of the old life that is going away, which hurt quite a lot as they peel off.

One is a box of bookmarks. We were both readers and until, say, ten years ago we had several books apiece in progress. So we needed bookmarks, and we’d grab free bookmarks wherever, and after a while Marian set up a box on a handy bookshelf to hold bookmarks so it was easy to grab one. There are bookmarks in the box from several decades of reading. Bookmarks from bookstores we’ve been in: Powell’s in Portland, Davis-Kidd in Knoxville, the Tattered Cover in Denver, Munro’s in Victoria. Dozens.

Now, here’s the thing. Starting a decade ago, we pretty much stopped buying physical books and moved to reading on our laptops: stuff on the web, or books on Kindle for Mac. We typically had one (1) bookmark in operation, in whichever book we were reading aloud from at bedtime. Everything else was on a screen. So these bookmarks have been gathering dust, unused, for years.  The newest is from a hotel in Normandy from our 2012 trip there.

Unused, unregarded bookmarks. They should be tossed. But it definitely hurts to do it. 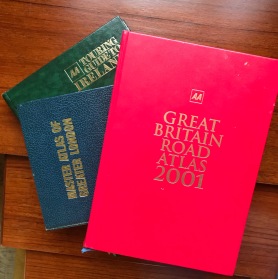 As I was boxing books from this shelf I hit three map books from our days touring the UK: a road atlas for Ireland, the AA road atlas of Great Britain, and a book that was absolutely essential to us for several years, the Master Atlas of Greater London. You see, children, there was once a time when we didn’t have GPS or a phone that ran a map app. We were utterly dependent on maps printed on paper, if you can imagine something so crude!

These handsome volumes have no use whatever now or in the future. The maps are out of date; before today they literally haven’t been off the shelf for 20 years; it has been literally forty years since we used the London Atlas. On my first day of sorting at FOPAL I learned that travel guides printed before 2000 are not kept; they go straight to the recycle bin. These books need to go into the recycle bin right here at home.

Along with the bookmarks.

I can imagine a sympathetic person saying “Well, why don’t you keep them, then? Or a couple of bookmarks anyway.” But that just puts it off. I’d face the same issue when packing to move to wherever I go next spring. It’s just more possessions to be responsible for, and really useless ones at that.

There’s the contradiction: these objects have a triple nature:

There are a lot of objects in this house that have this contradictory nature. How many do I keep?